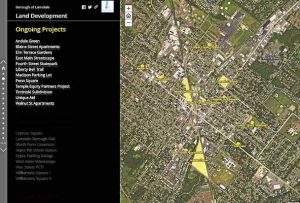 Borough staff has developed a new tool to give residents a clearer picture of projects coming to Lansdale.

An online interactive map has now gone live, showing a dozen ongoing projects, from streetscape upgrades to new home construction — all in one place.

“We’ve taken the two-dimensional land development map showing all of the projects, and have added a three-dimensional component to it,” said Assistant Borough Manager John Ernst.

“You can point and click on any type of a project, and bring up a 3-D image or architectural rendering,” he said.

Ernst debuted the map during the borough Planning Commission meeting Monday night, and said it has been developed over the past several months in coordination with the borough’s technology department, particularly GIS Analyst Justin Smith, who is in charge of upgrading the town’s Geographic Information Systems maps.

From the borough’s homepage, Lansdale.org, select the “Maps” heading, then “Land Development Map,” and you’ll be taken to a landing page showing the approved version of plans approved earlier this year to construct apartments atop the borough’s Madison Parking Lot.

The Madison plans are one of a dozen projects listed under the “Ongoing” header, including the new homes under construction at the Andale Green project on Hancock Street, the expansion of the Elm Terrace Gardens complex on Broad Street, the Liberty Bell Trail expansion running through town, and the East Main Streetscape project planned for 2018.

Other projects included on the interactive map include a proposed apartment building at Third and Walnut Street, the new townhouses currently being built on Cannon Avenue, and the site of the proposed borough skate park near the Fourth Street pool — no design has been finalized for the skate park itself, so the map shows a rough outline of where, and how large, the park would be.

“We will try to make sure that it stays current and active, and gives you guys a good source to see the big picture, and what’s going on,” Ernst said.

Planning Commission members heard an update on one project listed under the map’s “Completed” list: the North Penn Commons complex on the 600 block of E. Main St. is seeking approval from the borough zoning hearing board to install a monument sign featuring the names of four nonprofit agencies included in the project.

The zoning board will also hear plans during its June 20 meeting, Ernst said, from local distillery Boardroom Spirits, located on Third Street, to expand their store space and a tasting room into a building adjacent to their current location.

Ernst also gave the planning commission updates on several ongoing efforts, including revisions in the works to the borough’s accessory structure code and its wireless communication ordinance. Updated versions of those two codes, along with a draft of an updated subdivision and land development ordinance and a draft code on medical marijuana, are all now posted for public review under the Planning Commission page on the borough’s website Lansdale.org.

Montgomery County Planning Commission liaison Brian Olszak gave an update on a joint effort between the county and borough to update Lansdale’s comprehensive plan. A survey for residents is being finalized and will be publicized as widely as possible over the summer, Olszak said, and borough and county officials will likely appear at summer events such as First Fridays and Founders Day festivities on Aug. 26, he said.

Lansdale’s planning commission next meets at 7:30 p.m. on July 17 at the borough municipal building, 1 Vine St. For more information or meeting agendas and materials visit www.Lansdale.org or follow @LansdalePA on Twitter.

By Dan Sokil, The Reporter